Someone I’ve been searching for appeared before my eyes today and it wasn’t very far from Herbert Hoover’s grave.

We had just crossed the Mississippi River.  The Mother of North America Rivers.  Say what you want about the Hudson, Rio Grande or the Missouri; Big Muddy is what rivers are all about.   Yes, the mighty Mississippi…Old Man River…the Aorta of America…the Main Drain…separator of a continent…where the Eastern Dandy leaves his top hat behind and dons a Stetson and hip-straps a Colt.  St. Louis, Vicksburg and the Big Easy, New Orleans all feed at the shores of this legendary waterway.  Yes, we crossed it today.  It took about forty-five seconds…but it was toll-free.  Not bad considering you’ve entered another world.

We pulled up at the first Welcome Center Rest Stop.  I stretched my legs even though we had not gone that far.  It doesn’t take many miles for my legs to get crampy and stiff.  This was the Salt Kettle Rest Stop.  It seems salt was discovered in the area in the early 19th century.  The rusted salting kettle was on display near the parking lot.  I read the historical marker about a nearby town, where Herbert Hoover was born.

Eighteen wheelers were parked along the mid section of the pavement.  It was cool and cloudless; perfect conditions for a sunburn of my left arm as we headed west.  We started down the ramp to access the Interstate…that’s when I saw him.

He stood there near the end of the driveway.  There was a small bundle at his feet.  He looked me in the eye as we drove past him.  I returned his gaze.

This was a drifter…a modern day Oakie…a Hobo…a Loner on his way to a million somewheres.  He didn’t have his thumb in the air, he didn’t need to.  Any driver who took the time to see him, really see him, would know that he was waiting for a ride…any ride.

There was not time for me to stop and speak with him.  I couldn’t get a photo so you’ll have to use your imagination.  There was no time for anything except a moment of eye-to-eye contact.  I’d like to say that he smiled ever so slightly from his unshaven face, but I can’t say that.  His expression was one of…of no expression.  Just a direct, unapologetic momentary stare.  His head turned slightly as we passed him.  I hope he could see that we had no room for another person.

I’ve been waiting, watching and hoping for over a thousand miles, to see a man of the heartland…a Woody Guthrie, a Tom Joad, a specter from a Dorothea Lange photograph standing by the Blue Highway, a mute shade of a largely forgotten subculture of America.

I hope he could see that I wasn’t judging him.   In those few moments, I saw a lifetime…not mine, but his.  I had everything, a wife, a place to sleep, a car and a plan.  Part of me can’t help but think that he lacked some of what I claimed as mine.

It shamed me to think this way.  I knew nothing about this guy.  No, I wasn’t judging him, I didn’t know a thing about him.

But, in some odd way, in some strange inexplicable way, I liked him. 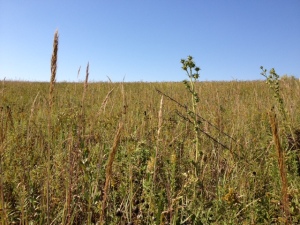