The question is quite simple.

Were you ever stuck in a small Sunoco station in a town in Pennsylvania, after filling up the tank of a car that was drinking petrol like a politician during Prohibition, while pulling a trailer that you, for a moment forgot you were pulling, with only .8mm of space between the fuel pumps and the side of your RV, and your tires wedged against a curb-like thingy, so hard pressed that you could not move forward or backward…at all?

A black sedan was parked against the stone wall.  I couldn’t make a forward-and-to-the-left move, so I cut too sharp and found myself unable to go anywhere.  I stood in the parking lot and stared at the fuel pumps, trying to use my telekinetic powers to will them away when a kindly gentleman with a soft mid-southern accent came up and asked if I needed help.  I nearly dropped to my knees while wiping sweat and tears away.  There is a God.  He’s six feet tall and from South Carolina.  He knew the obscure ways to make a car and trailer move as one.  It must be some sort of Secret Brotherhood of Travelers.  He possessed the key and he made it happen (along with three guys who looked like they were fullbacks for Penn State).  We had to disengage the car and RV and these guys, these supermen, these regular Joe’s rolled up their sleeves and MOVED AN RV THREE FEET TO THE RIGHT.  They may as well have displaced the orbital path of the planet.  I felt guilty about leaving that extra box of Facial Tissues in the R-Pod.  That kind of extra weight can be a killer.  I reconnected and moved away from the pumps.  I prayed again after decades of feeling sure God wanted no part of my life on His earth.  I was free.  I wanted to ask the guys if they wanted to join me at the bowling alley down the road later…for a game and a beer…on me,  of course,  but they were gone before I could shift into neutral and get out of the car.  Were they even real?  And where was the gentleman from South Carolina?  He had driven off with his wife in a car, just a car without a trailer.  I could just hear this God telling Mrs. God that gray-haired guy was never going to make it to Tacoma.

So, off we drove…westward and deeper into the Keystone State.  The urban scape of New Jersey got smaller through the rear-view mirror.  Now we’re talking.  Countryside.  Dried cornfields and real barns and tall silos, with plenty of split-rail fences.  But no farm girls were sitting on those fences.

But, not to worry.  It’s the Autumnal Equinox today.  The first day of Fall.  People say that the red-cheeked farm girls drop like leaves from oak trees, like acorns onto the fences of their farms…this time of year, and sit and watch the migration of the gray-haired guys heading west.  They’ll giggle and say: Now there’s a guy who’ll never make it to Orting…not the way he’s looking at us all, as we line the fences across the fly over states.

Well, they’re going to be wrong.  I can multi-task.

Are these the rail fence goddesses that will monitor my westward odyssey?  Are these the sirens of the corn mazes? 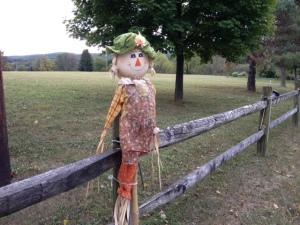 2 comments on “Travels: Part 2 Stuck Inside of Stroudsburg With the Orting Blues Again”