The late afternoon was growing warmer and more humid with each passing hour.  But it was the nature of late July in Saratoga Springs.  The south winds blew and with it came the heat and the dampness from the far off ocean.  The summer was waning but not giving up yet to the crisp autumn days that lay ahead.

Yes, it was getting most uncomfortable in the Grandstand of the race track.  The great thoroughbreds had to be watered and splashed with cool water after each race.

A pretty young woman with copper-red hair was beginning to feel like a wilting lily.  Her beautiful hair, hair that turned the heads of men and other women alike, was taking on unexpected curls.  Her pale forehead was damp with a rose scented dew of perspiration.  Her name was Ashley Kent.

Ashley was a newly married woman.  She and her new husband, Spencer, were on their honeymoon in Saratoga Springs that summer of 1951.  They chose that quaint village north of Albany because it offered many ways to spend the lazy days of July.  In truth, Spencer much preferred spending his money on the horses while Ashley chose to take the waters at the many spas.  She only came to race track to humor Spencer.  She would  stay for a few races before excusing herself to return to the hotel room to nap, read a book or seek out a new spa in which to indulge herself.

She was happy to be married and felt she truly loved Spencer.  Still, she felt something, a little seedling of an emotion deep in her heart that brought up questions.  Was her love real and absolute? Or did she agree to the marriage so that there would be no shame on her family’s good name.

A week after her wedding, Ashley was a month into her pregnancy.  She felt it and knew it before she even consulted a doctor.  After she missed her period for the month…she simply knew.

“I’m off, sweetheart,” she told Spencer, as she picked up her few items from under the seat of the grandstand.  “I’m going to that Spa we saw yesterday during our walk in the town park.”

“You look a bit pale, my dear,” said Spencer, barely taking his eyes from his binoculars.  “Will you be alright?”

“Yes, of course.  We’ll meet up at the hotel about seven.  Is that alright with you?”

“Sure, about seven.  The last race will be about five-thirty so it all works out.  The pay phone behind you, on the column there.  You have that number so if something comes up, just call me.  I’ll be right here until the bitter end.  Perhaps the gods will smile at me and I’ll win enough for a really fine dinner of the lobster you’ve been asking about.”

“Kiss, kiss my dear.  See you later, Spencer.  I hope I don’t love this pool so much that I’ll never want to come out.”

The young husband helped his young bride to the last step and with a final kiss, returned to his seat and held his binoculars hard against his eyes.

“Oh, and Spencer, when I looked into the Spa the other day I noticed a bank of telephones near the entrance way.  I wrote the number of the last booth on the right.  Here, take it and call if you get bored.  I’m sure an attendant will take the call, they’re told to answer the phones in case someone is to be located.  Remember how we did this from the two drug stores in Queens?  That was so cute the way you’d call from one only a block from where I worked.”

“Got it, Ash,” said Spencer as he slipped the number into his shirt pocket.  “Bye, luv.”

Ashley took a taxi to the old Lincoln Spa.  Twenty minutes after she left Spencer, the pay phone on the column behind him rang.  He stepped over to it and answered.

“It seems fine so far. I’ve only just walk around…Spencer…there’s something odd about this place.  I just don’t know.  Something odd, you know, funny, about the people walking around the lobby.  Some look like they’re lost or something.”

“Oh, silly, just find a pool and relax.  Get pampered, that’s why we’re here.  Look, I have to get back, the race is about to start.  Bye, dear.”  Spencer hung up and went back to his seat.

The races were over and Spencer lay back on the feather bed of the hotel.  He figured he had about forty-five minutes to take a quick nap, before Ashley arrived.  He closed his eyes.

It was dark when he woke up.  The ceiling fan had put him into a deep sleep with its slow rotation and cool breeze…the way a vampire bat put its victim to sleep with the fanning of its large wings.

He looked around.  There was no sign of Ashley.

He went down to lobby and asked if any messages came in for him.  There was nothing. Spencer sat in a great wing-backed chair near a potted palm tree and tried to think.  His wife was nearly two hours late.  He felt his pocket and found the slip of paper with the phone number of the last booth near the entrance of the old Lincoln Spa.

Spencer found a phone just off the lobby and called the number.  No one answered. He went to the bar and ordered a cognac.  He went back to the phone and called again.  Still, no answer.  He waited a few minutes, his anxiety increasing with each second that ticked away on the large clock on the marble wall

He called once again.

A voice came on the line.

“I’m sorry, but the number you are trying to reach has been disconnected.”

“What the hell do you mean? shouted Spencer.  “What do you mean disconnected?”

The operator paused and said:  “Sir, that number you have trying to call has been out of service for many years.”

“I demand you put the call through, miss.”  Spencer was livid.  “Place the call, dammit!”

It was a warm day in late July, 2013, in Saratoga Springs.  The south wind was bringing in moisture from the sea.  People sat at the races and people went shopping on Broadway.

The lobby of the old Lincoln Spa was nearly deserted.  The people who walked in and out of the building to use the public toilet passed a row of empty phone booths.

A young man passed the last booth on the right and heard a distinct ringing…like an old-fashioned telephone.

If there was a phone nearby, he would have answered.  But as he walked on, the ringing in his ears kept on, and on…and on. 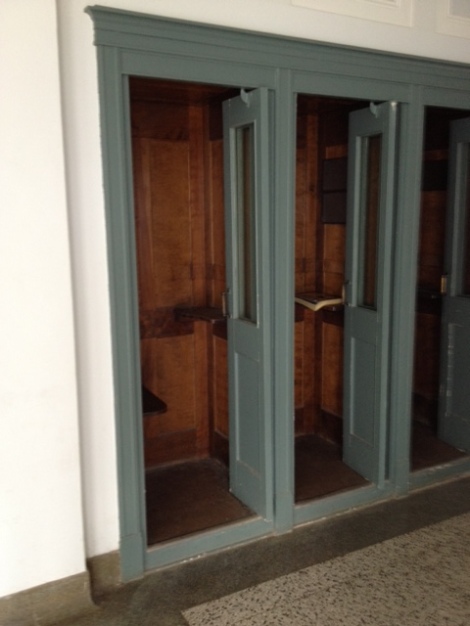