It’s been said that the human soul weighs 21 grams.

A gram is equal to the weight of a standard paper clip.  So, if you hold 21 paper clips in the palm of your hand, you’re hold what amounts to the heft of an eternal soul…a soul that will spend all of time in eternal bliss or never-ending torment.  21 paper clips!  That’s a pretty small amount for such a precarious an item as a human soul.

I’ve been doing some thinking about this and my musings has led me to astonishing places.  I own an iPhone and I’ve been hard at work calculating the weight (really it’s called ‘mass’, but I’ll stick with ‘weight’) of email.  My phone, like everyone else’s, receives a ton of text messages, voice mail, email and photos, among other things.  Most of this comes to me from those people I care about, but, alas, some comes unsolicited, i.e., junk mail.  I really don’t want to know about a bargain condominium in Boca Raton or a relaxing get-away weekend flight to Thule, Greenland.  This avalanche of data begins to make my iPhone heavy.  So much so, that if I carry it in my pants pocket, my pants begin to sag and droop down my leg forcing me to tighten my belt which in turn cuts off circulation between my torso and my thighs.  It can get ugly, I tell you.  So, I delete.  I delete every day.  If I’m in an aggressive deleting mood on certain days, I do so with abandon.  The little rubber nub at the tip of my stylus begins to show signs of stress fractures about the width of three microns.  Soon I’ll have to spring for a new stylus.  $18.00 for a plastic pen-like thing that won’t even write.

The general rule, as I see it, is that the fewer emails and such, the lighter my iPhone becomes.  But this brings on a new and very serious dilemma: some emails are heavier than others and I am forced to make a value choice.  There are texts from my wife about not forgetting to buy the Skim Milk.  A reminder of a doctor’s appointment.  A photo of my new grandson.  Some weird object or broken down barn that caught my eye while driving.  A note from my son thanking me for getting him two tickets for a Broadway show.  A birthday wish.  A simple “I love you” from someone I love in return.

I want to keep these special emotes, but I can’t keep them all.  My pants would sag.  So, how do I choose what goes and what stays?  I’ve come up with a rough rubric to solve this situation:

Once upon a time, many of these connections were made over a telephone.  But they had to be stored in your head.  Maybe that explains why people in the 1950’s seemed to walk around with their heads hanging.  Now, this slim package of diodes and chips are, at once, your wallet, purse, scrapbook, phone book, tape recorder, camera, arcade and library.  It’s all there in the palm of your hand.  And it fits nearly everywhere.  Now, that’s heavy.  Heavier than your soul.

So heavy, it can make your pants sag. 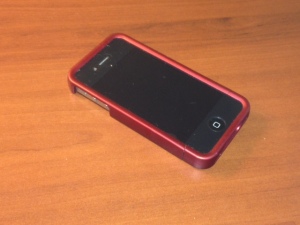